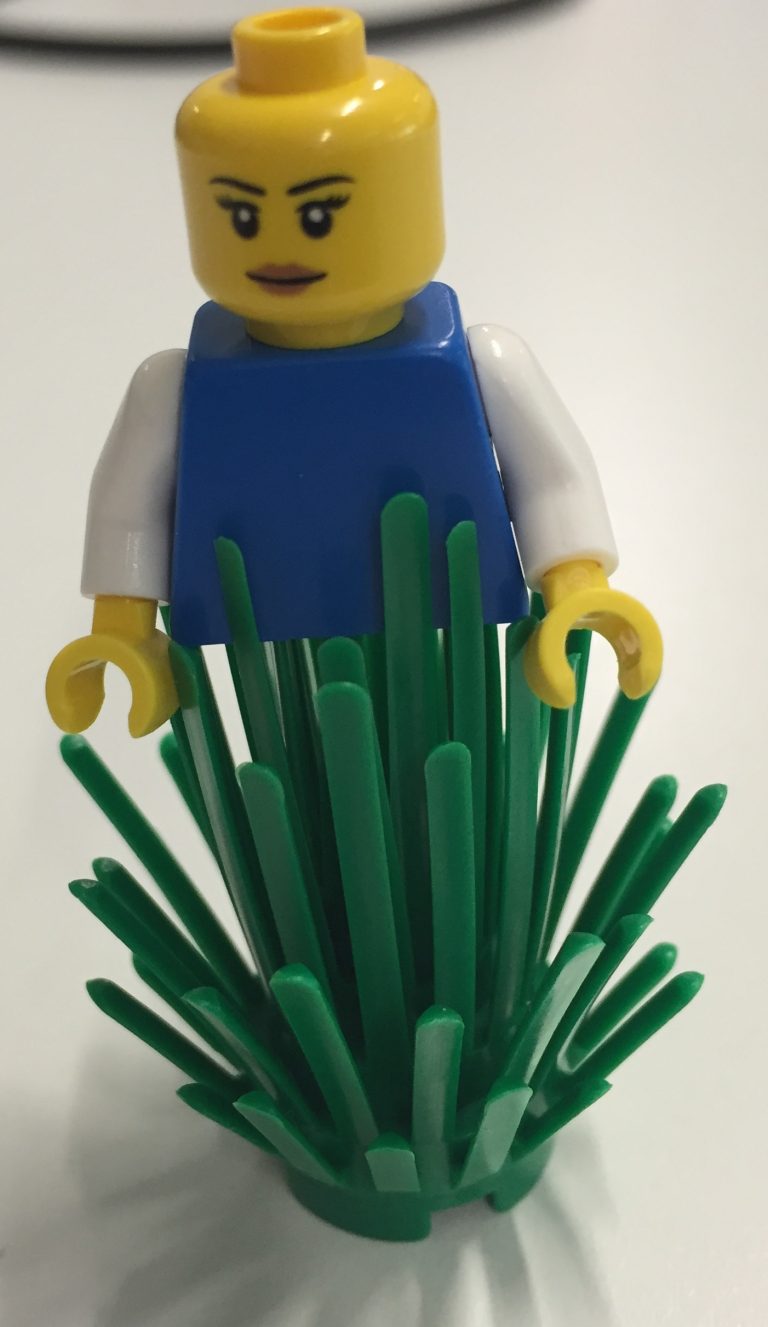 This quote (describing the above pictured model) from a workshop participant some time ago is among my favourite moments in facilitating LEGO® Serious Play® workshops. I call them ‘mini-transformations’ – when an individual or group experiences a moment of clarity and insight that profoundly affects them. As a facilitator, witnessing these moments, enabled by the LSP method and the psychological safety it engenders, is the best part of the job.

Having recently returned from an incredible few days in Billund, home of LEGO among 180 other LSP facilitators from around the world, talking about the increasingly varied uses to which LSP is being successfully applied and the growing research activity on its effectiveness, it occurred to me that these mini-transformations are a big part of what makes LSP different – and yet they can easily get lost in the big picture.

So, I’m sharing some of them here.

Starting with that pineapple.

1: “Sometimes you have to sit on a pineapple”

This public sector team had been working for 18 months on the proof of concept for a major digital service and were about to embark on the ‘beta’ phase. Although they had successfully delivered the POC, the team was generally quite grumpy, so as part of the kick-off for the next phase, I ran a short LSP project kick-off workshop.

As a standard part of the workshop, I asked the participants each to build a model of one aspect of what it was like to be part of the team. Although I had given them a generous amount of time to do so, one participant simply stuck the top half of a mini-figure on top of what looked like a spikey plant (pictured). This naturally led to curious looks from other participants who were busily working on more complex models.

After an awkward silence, the team lead asked: “Is it me? Do I give you those pineapples?”

The participant, looking at his model: “Yes”

“Does anybody else feel that way?”, the lead asked.

Three people, all looking at the model – not in each others’ eyes – slowly raised their hands.

“I get that,” said the lead, “The thing is, I get given loads of tasks for the team. Quite often I have the same reaction; and I push back on some of them – but I can’t push back on everything. So sometimes we have to do them – I guess sometimes you have to sit on a pineapple.”

At that moment, you could feel a change in the mood. “Sometimes you have to sit on a pineapple” emerged as a guiding principle for the team. From then on, the lead could come into a planning meeting, holding up an imaginary fruit: “I’ve got a pineapple – who wants it?” and be sure of getting volunteers to take it on.

Depersonalising an ongoing issue by working on it through a model rather than eye-to-eye allowed it to be surfaced, dealt with and turned around to a lasting positive within 20 minutes.

The pain had been acknowledged and, from that point forward, taking on a pineapple had become a badge of honour.

2. “I’ve always wanted to know what it’s like to be in love”

Two teams with overlapping remits within this marketing organisation had been brought together and were finding it, to say the least, difficult to get along. An LSP team development workshop sought to help define a shared purpose.

Each participant was asked to build a model of what they brought to the team and what they could bring more of. I then suggested that they add to their model something that no-one else in the room knew about them.

One participant built a heart. When asked what it represented, she hesitated as to whether she wanted to share it, but then said: “The heart represents the fact that I’ve always wanted to know what it feels like to be in love.”

In that moment, the feeling in the room palpably changed from a polite (but, if not frosty, certainly not warm) engagement to a real feeling of collaboration, shared experience and willingness to really listen, share and learn.

As Daniel Coyle writes in his excellent book ‘The Culture Code’:

“Vulnerability doesn’t come after trust – it precedes it. Leaping into the unknown when done alongside others, causes the solid ground of trust to materialise beneath our feet.”

This is the best example I have experienced of the LSP method liberating a team to make that leap to show vulnerability and become a single team.

Build a model of what you bring to the team: “The elephant in my model represents that I have been here doing this for 30 years. I’ve seen so many changes – and given what’s in my (elephant-like) memory, there is little I don’t know about what lies ahead.”

Early in a strategy workshop for a complex initiative, involving a hastily assembled team from a wide range of different backgrounds in a rapidly changing environment, this felt like a massive red flashing warning light. The solid, dependable meaning intended by the elephant felt like a big lumbering beast potentially dominating the landscape.

And yet, a few hours later, after jointly exploring through LSP the purpose, the required capabilities and the ‘agents’ in the landscape that could impact the initiative, the same participant noted that despite 30 years in the business, he had “seen it all from a whole new angle”.

The LSP process, embedding as it does roughly equal turn-taking, active listening and the requirement to engage with other people’s ideas physically as well as verbally, had tamed this elephant in a way that it would definitely remember.

These are three of my favourite stories; but there are many more.

Sometimes it’s an individual such as the contact centre worker who excitedly “realised that I could be creative”; the marketing executive who tearfully “learned that you didn’t think I was useless”; the civil service director who owned up to his team that he was feeling out on a limb; or the HR director for the first time understanding a problem she had being struggling with for months – each of which unlocked latent potential within and across the team.

Other times, the transformation affects the whole team: the client admitting to its contractors at the kick-off of a major project that it tends not be good at supporting its contractors to deliver, which led to a grown-up discussion with the contractors about how they could help each other to mitigate this risk from the start; the cross functional leaders developing a business model for a major industrial company seeing “the whole picture for the first time” leading to an outpouring of ideas after having been stuck for weeks; or the Brexit-driven project team brought together from among various government functions realising that they had been talking at cross-purposes, hadn’t been listening to each other and needed to restart.

These moments are not sufficient in themselves to drive change; but they are great catalysts – and I find it hugely rewarding to be able to see these individual and group transformations happen.

If you’d like to find out more about how LSP can support your business or organisation, please do get in touch.

Making the most of each other: a more hands-on approach to knowledge management

I write occasional articles on the importance of play and how techniques like LEGO Serious Play can unlock the hidden individual and team potential for productive and inventive interactions that the vast majority of organisations never manage to tap into.

All are published on my LinkedIn page, so please do follow me there.